Stones, Lines and Coffee (just another week in the life...)

As usual, with summer comes the rush...

So much to do, so little time. Still, lots of terrific things are happening in the Jarea Art world these days.

Jantje's sculpture "Seven Rocks" which is currently in the 2011 Kingsbrae Garden Sculpture Competition, is now sold! 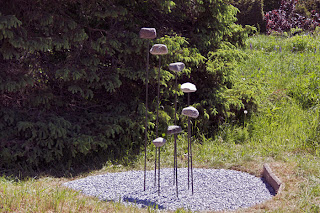 Here's how she described this piece:

"We are surrounded by rocks of all sizes and shapes. Rocks have been the source of inspiration for mankind throughout time.

"The combination of the earth's natural elements rocks and steel rods resemble our resilience to persevere.

"Throughout time the number seven has played a large role in many cultures. Seven corresponds to the seven days of the week, the seven planets, seven rungs of perfection, seven spheres of celestial stairs, the seven petals of the rose, the seven branches of the shaman's cosmic tree and so on. Seven denotes the fullness of the planetary orders, the fullness of the energies and principles in spiritual order. Seven was the Ancient Egyptian symbol of eternal life, and symbolizes the dynamic perfection of a completed cycle. Seven conveys the fresh start after a cycle has been completed and of positive regeneration. Seven occurs in countless Ancient Greek traditions and legends—the seven gates of Thebes., the seven strings of the lyre, the seven spheres… There are seven emblems of the Buddha and seven primary chakras in the subtle energy system."

Then, Geoff's line painting "Preparing for the Ride (Self Portrait)" was purchased by a lovely family from Montreal. This piece will be shipped later this week. 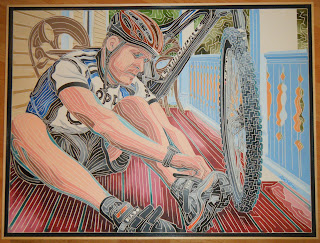 Meanwhile, I have been busy with our Etsy shop. I recently added a new line of products, especially designed for coffee lovers like me. Coffee Charms are miniature coffee paintings, framed in magnetic frames and shipped in coffee bags. I'm busy making more every day and (in addition to having them online at etsy) I will be putting them on display in the studio by the water later this week. 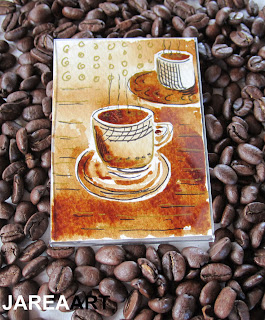 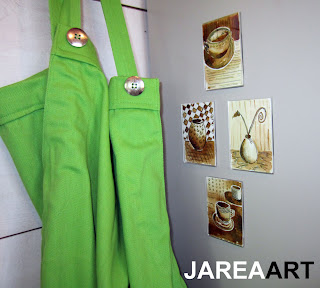 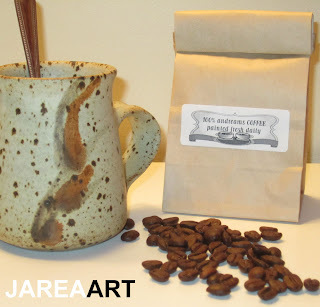 Until next time,
~Andrea

Posted by Jarea Art Studio - Folk N Fine at 7:56 AM No comments: