For the third year in a row, Jantje pulled together folk artists from across the Maritimes to take part in the annual Folk Art Exhibit she volunteers to organize. The show is held in the Kingsbrae Garden art gallery in St. Andrews, NB.

Here are the artists who are participating in the 2013 Folk Art Exhibit. 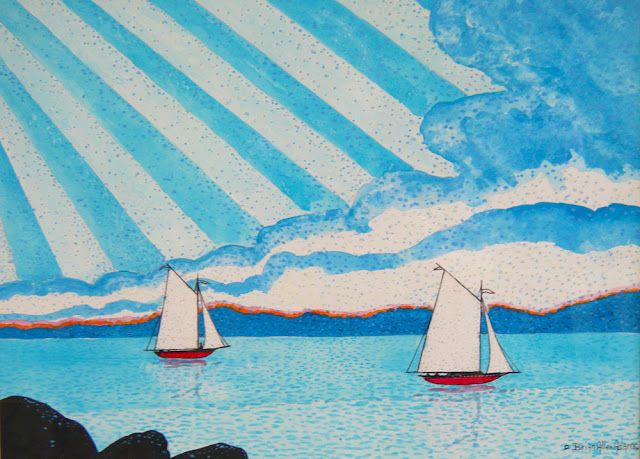 Brian is a Canadian Folklore painter. From his studio, Brian commits to canvas his unique images of the spirit of Canada. Brian is also an avid collector of folk art and has spent the last 30 years collecting and studying the Canadian evolution of folk art. Brian's paintings transport the viewer to places we all know exist but few of us have ever seen.
On Facebook: Great Canadian North Art Gallery 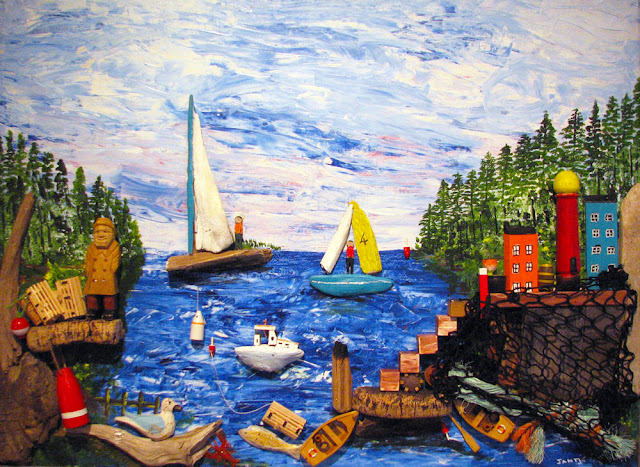 Jantje’s work reflects her seaside surroundings and her colourful, collages, paintings, woodburnings and sculptures can be found in collections around the world. In addition to making art, Jantje writes about folk art, giving creative souls a voice. Jantje is co-founder of KinderArt.com and the creator of the Sunbury Shores CLASS Program.
www.JareaArt.com 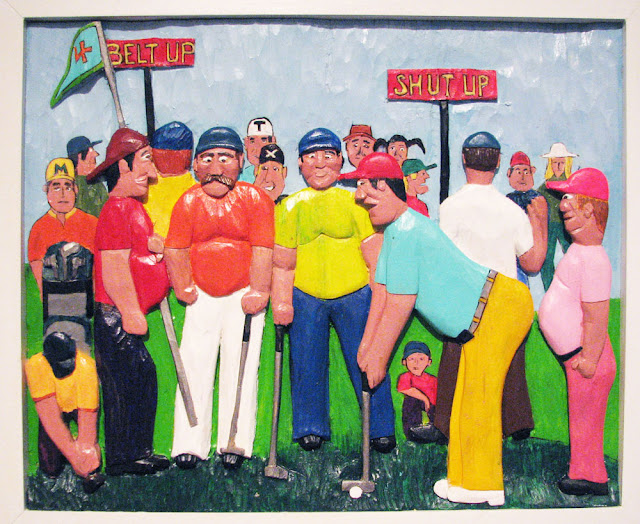 Doug skillfully carves his relief sculptures from single pieces of wood so that figures and landscape seem to emerge from within. Depending on the piece, he may use kiln-dried pine, poplar, or "sea-seasoned" wood to create his carvings. Following in the footsteps of his shipwright father, Doug took up carving in1994 after retiring from a career in the navy. 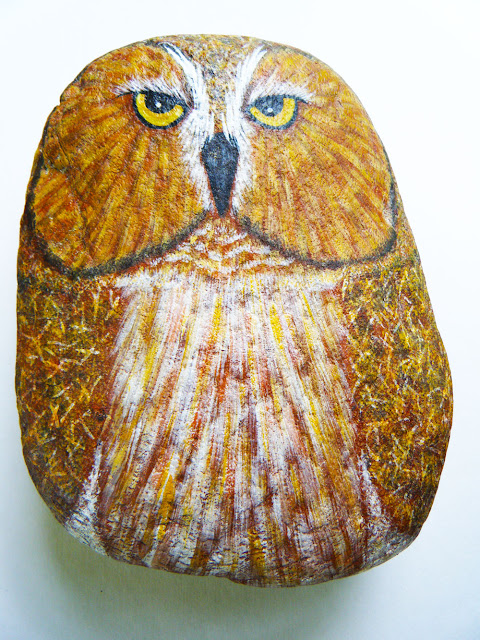 Lorain is a self-taught artist who lives in central New Brunswick. She works with stone and wood and is influenced by texture. Lorain works mainly with acrylics and each piece is an experiment in creating art from the everyday. 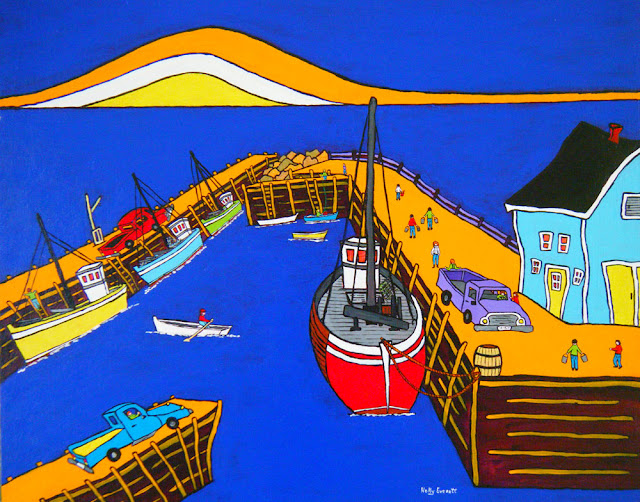 Holly was raised in a small Nova Scotia fishing village and today resides nearby with her husband, two children and dog. Her interest in painting began after buying her mother an art kit as a gift. After spending many years in the accounting field, Holly found her true self and can now be found splashing colourful paints across canvases.
www.hollyeverettgallery.com/artshop 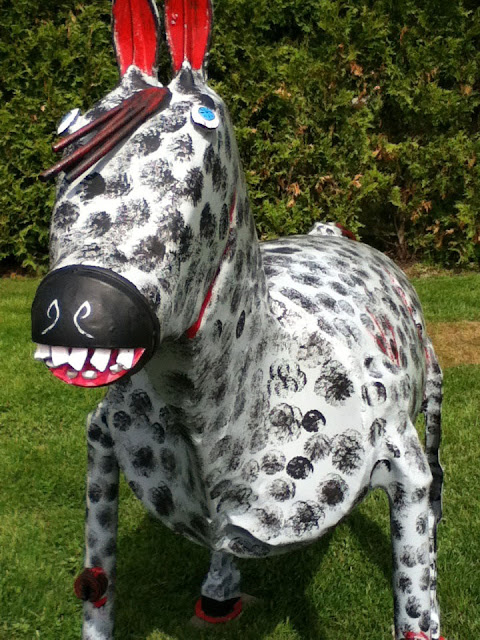 As a young man, Kerras worked as a farm labourer. Having just his grade six education, he never dreamed of being his own boss. The changeover began in 1995 when he began a woodworking business, making screen doors, gingerbread trim for houses and the odd piece of folk art in his backyard workshop. Today, folk art is the mainstay of his business and popularity. He also builds reproduction cabinets and furniture from old doors and recycled materials.
www.birchgate.ca/kerras

Maureen grew up in the Annapolis Valley. She draws inspiration for her paintings from her love of rural Nova Scotia. Driven by a desire for a "simpler life", Maureen and husband Robert retired, leaving behind successful careers in the IT industry. With no formal training, she began painting in 2006. Maureen is a grandniece (by marriage) of Nova Scotia folk artist Maud Lewis.
www.mnewmanfolkart.com 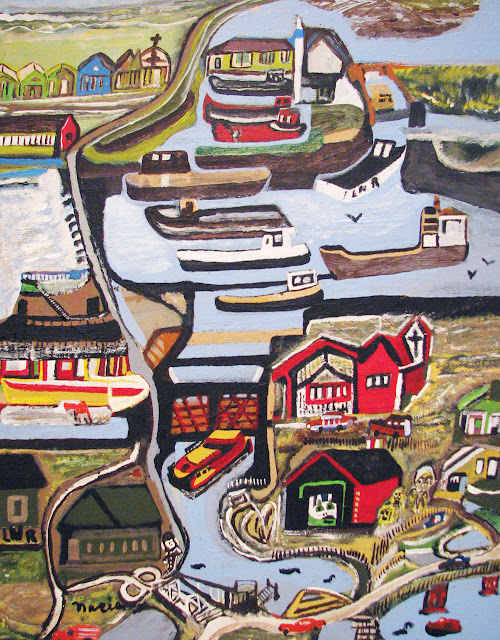 Leo was born in St. Charles, NB and for 22 years worked for BASF. When the company restructured, Leo drove a school bus until retirement. In 2003, Leo was diagnosed with Parkinson's Disease. Shortly after, he began painting said, "When I paint I can block everything out and focus on what I am creating at that moment, it’s good therapy.” Sadly, the paintings on display are among his final works. His wife Marie-Mai has graciously shared his work so that others may enjoy what gave her husband such pleasure, and in this way his memory will carry on. 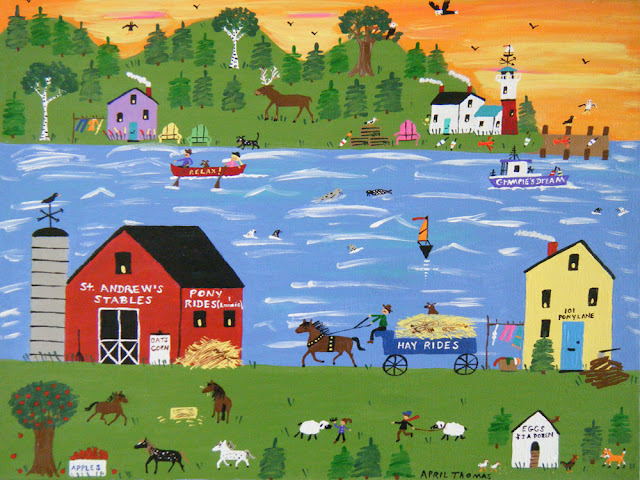 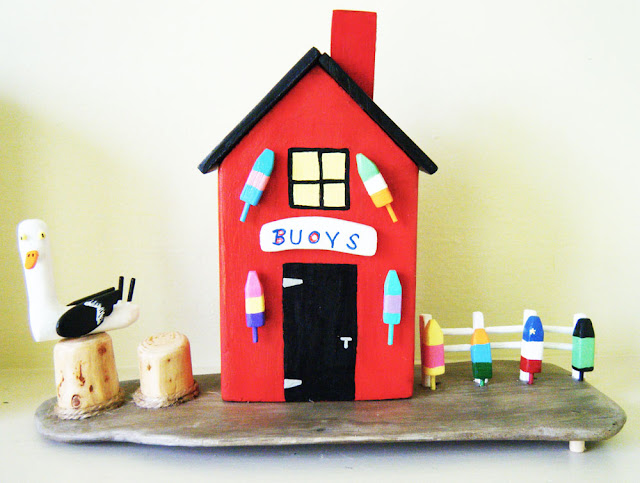 Laurie carves and makes wooden pieces, while April paints. The Thomas’ are juried artists at many shows, including the Nova Scotia Folk Art Festival in Lunenburg NS. They also do folk art restoration on many found and recycled items. April and Laurie draw their inspiration from the sea near their home.
On Facebook: Folk Art by April and Laurie Thomas
Posted by Jarea Art Studio - Folk N Fine at 10:19 AM